Coulee Classic is associated with the Chordsmen and have appeared in our show. They are Quartet Champions of the Land O Lakes District and will compete in Charlotte in July for the BHS International Competition. 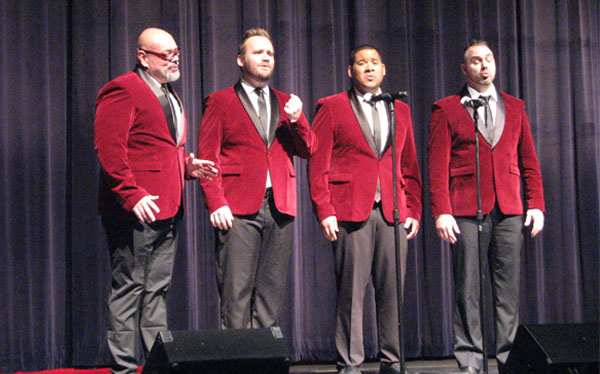 The Special Export quartet formed in December of 1997 with members: Lee Rasch-lead, Roger Christians- baritone, Gary Buxengard- tenor, and Clark Hanmer- bass. Clark moved to North Carolina in 2001 and Charlie George joined the quartet to sing bass. Special Export enjoys singing in the “doo wop” style though they also perform gospel songs and music in the traditional barbershop style. If you attend a performance by Special Export, expect to be entertained with jokes and comedy songs. They have fun on stage! Over the years, they have had hundreds of performances throughout the region, for audiences large and small. 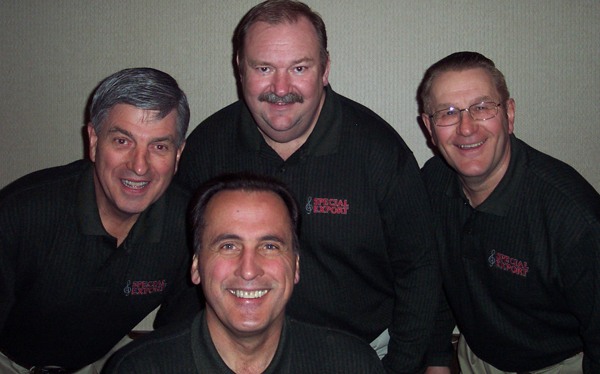 Lee joined the Coulee Chordsmen in 1997 and became a founding member of the Special Export Quartet in 1998. In addition to singing in the chorus and quartet, he plays the bass guitar in The Executives, a 60’s rock and roll band.

Lee is a past president of Western Technical College, is active as a community volunteer, and serves on seven local, state, and national boards. Lee also finds time to walk his two greyhounds.

Gary grew up on a farm and went in to the U.S. Navy after graduating from Spring Grove High School. He served three years on active duty and 23 years in the Reserves. He farmed for 26 years and now rents out the land. He keeps very busy as a carpenter.

Gary joined the chorus in May 1975 and has sung with many quartets. He prides himself on being able to sing all four parts. He began Special Export in 1998.

He likes to read, sing, and celebrate at reunions with his former shipmates each summer. He is commander of the local Legion and is on the board of directors for Wilmington Mutual Insurance Company. He is known for his unending repertoire of Ole and Lena jokes.

Roger has been a Barbershopper for 21 years and has sung in several quartets throughout those years. He teamed up with Lee and Gary to form Special Export in 1998. He is recently retired from Dairyland Power Cooperative; he worked at their Nuclear Station in Genoa for 36 years. He also served for six years aboard the U.S. Navy nuclear submarine George Washington. Roger is married to wife, Kenna, and in their 40+ years of marriage, they have two sons and two grandchildren. His other musical interests include performing with his 60’s rock band The Executives.

Charlie grew up in southern Wisconsin and moved to the La Crosse area in 1990. He has been married to his wife Cindy for 37 years. He enjoys singing many different styles of music and has a special liking for the close harmony of barbershop style. During his 14 years as a member, he has sung with four different quartets, served on the board of directors, and he is our current president of the Coulee Chordsmen.

He was a professional chef for over 40 years and is now retired. He raises honey bees and works in flower gardens with his wife. They have three children and four grandchildren.

Three Docs and a Dash Quartet

“Three Docs” is a quartet consisting of a UWL professor, Brad Seebach, Holmen,  father and son team of Jon Williamson, Sparta, and son Marty of Onalaska. The three of them represent the docs. Our “dash” is co-director Eric Sorenson, of Onalaska. 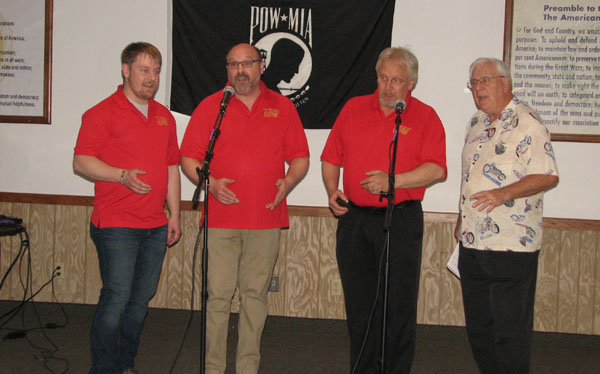 Brad Seebach is an experienced barbershopper as well as an accomplished vocalist in our area. He also sings with the LaCrosse Chamber Chorale. With his vocal versatility he often lends his voice out to other quartets in need of a singer. Brad is a science professor at UW – LaCrosse.

Marty Williamson is definitely a chip off of the old block when it comes to singing the barbershop style. As a newer member of the Chordsmen Marty has a lot of repertoire to learn but his enthusiasm and talent will greatly benefit the chorus and quartet.

Eric Sorenson has been a chordsmen/co-director since 2010. He has sung in many quartets but hopes “Three Docs” will be become a long standing ensemble. Eric is a retired choral director teaching in the West Salem and LaCrosse School Districts. His first evening of singing with the Chordsmen began at 7:00 PM. He told his wife Barbara he would be home by 9:30. As he walked in the house at 12:15 AM his wife asked, “Well, did you have fun”?

Jon Williamson is an optometrist in Sparta, WI. He has sung in many varied quartets often volunteering to sing other parts when needed. Jon loves to search out new and challenging songs for the chorus as well as “Three Docs”. Jon enjoys being a member of the Chordsmen music team and has played many outlandish characters in our shows.

A love of barbershop harmony has kept this very active quartet together through the decades. These talented singers are often asked to fill in their part with other quartets in need of a fourth voice. Look for them to appear in every performance the Coulee Chordsmen Chorus presents. 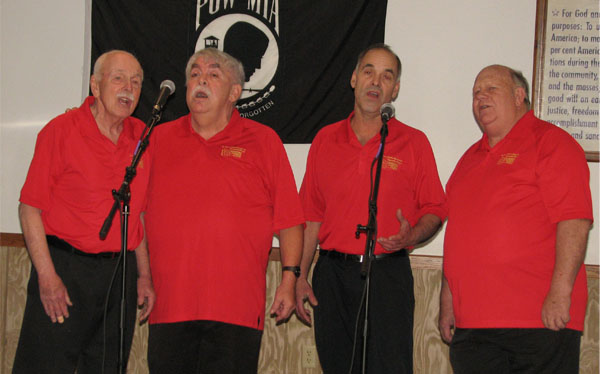